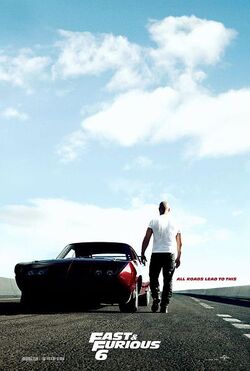 Fast & Furious 6 (alternatively known as Fast Six) is an upcoming action film written by Chris Morgan and directed by Justin Lin. It is the sixth installment in the Fast and the Furious film series. Vin Diesel, Paul Walker, Dwayne Johnson, Michelle Rodriguez and Jordana Brewster will star.

Fast & Furious 6 was in development by February 2010 as the first film in the series to move away from the underground car-racing theme of the series' previous films which was considered to have placed a barrier on audience numbers. Pre-production had begun by April 2011, and principal photography began in London, England in July 2012. Filming locations also include the Canary Islands, Scotland, and Los Angeles. The film is scheduled for release on May 24, 2013.