Edit
watch 01:54
Obi-Wan Finale - The Loop
Do you like this video?
Play Sound

Ora is the debut studio album by British recording artist Rita Ora, released on 27 August 2012 in the UK through Roc Nation. The album was recorded from 2009 through to 2012. Ora enlisted a variety of producers such as will.i.am, Ester Dean, Drake, The-Dream, Kanye West and Stargate. Samples of the album's standard edition was made available on iTunes UK store on 9 August.

Highlighted by several number one hits the album reached number 1 on the UK albums chart and number 1 on the Scottish albums Chart selling around 40,000 debut sales between the two countries. The album has since been certified platinum in the UK for sales over 300,000 copies. Across Europe and Oceania the album was a moderate Commercial Success making the top 40 and several countries. However in the United States the album failed to make any commercial impact missing the top 200 completely. Odd considering many popular female singers across Europe such as Marina And The Diamonds and Florence and the Machine we're able to make commercial impact in the states.

The cover for "Ora" is Rita with her hand on her eye. 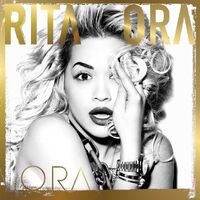 The cover for the deluxe edition is the same as the original, but the deluxe is yellow.