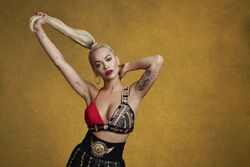 Rita Sahatçiu Ora (born 26 November 1990) is a British singer-songwriter and actress. In 2012, Ora released her debut album, Ora which debuted at number one in the United Kingdom. It also spawned three number-one singles—"Hot Right Now", "How We Do (Party)" and "R.I.P" which made Ora the first artist in 2012 to have three consecutive number-one singles on the UK Singles Chart.Ora has a mezzo-soprano vocal rance.Ora is nominated for three awards at the 2013 BRIT Awards, including the Brit Award for Best British Breakthrough Act

Rita Ora was born in 1990 in Pristina, SFR Yugoslavia (today Kosovo) to Kosovar-Albanian parents and moved to the United Kingdom when she was 1. She grew up around Portobello Road in West London, and attended St Cuthbert with St Matthias CE Primary School in Earls Court, following which she graduated from Sylvia Young Theatre School and then St Charles Catholic Sixth Form College. Today she lives in Kensington, London.Ora began singing from a young age. In 2004, she appeared in the British film Spivs. She auditioned for Eurovision: Your Country Needs You on BBC One to be the British contestant for the 2009 Eurovision Song Contest but later withdrew from the competition after a few episodes as she did not feel ready. In 2007, Ora had her first music release when she appeared on Craig David's track titled "Awkward" and then again in 2008 on "Where's Your Love" featuring Tinchy Stryder, for which she also appears in the music video. Ora began singing in bars in and around London, and in 2009 an A&R told Roc Nation about Ora, a few days after Ora flew out to New York and met Jay-Z. In 2009, Ora made a cameo on Jay-Z's video for "Young Forever" and "Over" by Drake. Ora caught the attention of Jay-Z and he signed her to Roc Nation, for which she was featured in a commercial for Roc Nation + Skullcandy Aviator Headphones.

About recording her debut album[3] :