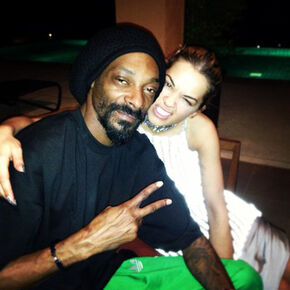 After leaving Death Row, Snoop signed with No Limit Records, where he recorded his next three albums. Da Game Is to Be Sold, Not to Be Told (1998), No Limit Top Dogg (1999), and Tha Last Meal (2000). Snoop then signed with Priority/Capitol/EMI Records in 2002, where he released Paid tha Cost to Be da Boss. He then signed with Geffen Records in 2004 for his next three albums R&G (Rhythm & Gangsta): The Masterpiece, Tha Blue Carpet Treatment, and Ego Trippin'. Malice 'n Wonderland (2009) and Doggumentary (2011), were released on Priority. Snoop Dogg has starred in motion pictures and hosted several television shows including, Doggy Fizzle Televizzle, Snoop Dogg's Father Hood, and Dogg After Dark. He also coaches a youth football league and high school football team. In September 2009, Snoop was hired by EMI as the chairman of a reactivated Priority Records.

He is gonna be featured on Rita's song "Torn Apart".The song is gonna be released as the lead single from the US edition of  "Ora".The music video to the song is shot in Thailand.